This is the Public Trust Building not far from where I work. It’s one of my favourite heritage buildings in Wellington. It is a beautiful building and I’m especially pleased that beautiful buildings like this are preserved and earthquake strengthened (despite the cost) rather than just bulldozed to make way for something new.

I love that Wellington is a beautiful mix of old and new buildings.

2. an object having interest by reason of its age or its association with the past: a museum of historic relics.

The Old Government Building is situated on Lambton Quay in Wellington, New Zealand. It was completed in 1876, and is the second-largest wooden building in the world.

It is a simple but beautiful building, and I decided only to take photos of the outside (though it may have been warmer inside the building as it was a grey, cold winter day) because I see the outside of the building as it is situated diagonally across from my workplace. There is something about the simplicity of this grand structure that has always caught my eye. 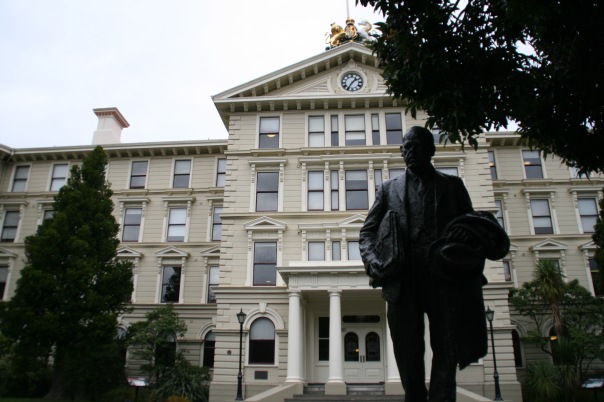 “It is indeed a terrible thing and a reflection on our civilization that, in a land of plenty, children should lack sufficient to eat…” Peter Fraser, NZ Prime Minister 1940 – 1949